High Impact PracticeImplement interventions to strengthen an individual’s ability to achieve their reproductive intentions by addressing their knowledge, beliefs, attitudes, and self-efficacy.
An Accredited Social Health Activist (ASHA) interacts with a young mother during a home visit. Credit: Images of Empowerment

Accurate knowledge about family planning has long been understood as a critical factor to reach various family planning goals1,2 and essential to informed choice.*1 Furthermore, inaccurate knowledge about fertility has been associated with unintended pregnancies.3 Experts believe that individuals with accurate knowledge that goes beyond knowing a few contraceptive methods, such as knowledge of fertility or contraceptive side effects, are more likely to use and less likely to discontinue using family planning to fulfill their fertility intentions. In addition to knowledge, other individual factors influencing someone’s ability to reach their fertility intentions include beliefs, attitudes, and self-efficacy.**2 Several theories highlight the role of these factors in behavior change, including the theory of planned behaviour, social learning theory, and the ideational model, and there is significant research on their influence on health behaviors.4

*Informed choice emphasizes that clients select the method that best satisfies their personal, reproductive, and health needs, based on a thorough understanding of their contraceptive options.13

**Self-efficacy is often used synonymously with agency but they are a little different. Agency actually describes the physical ability, resources, and control necessary to deal with a task or situation (compared to one’s perceived ability or beliefs).5 Agency is not well-documented in the family planning literature and requires further study. Thus, it is not included in this brief. 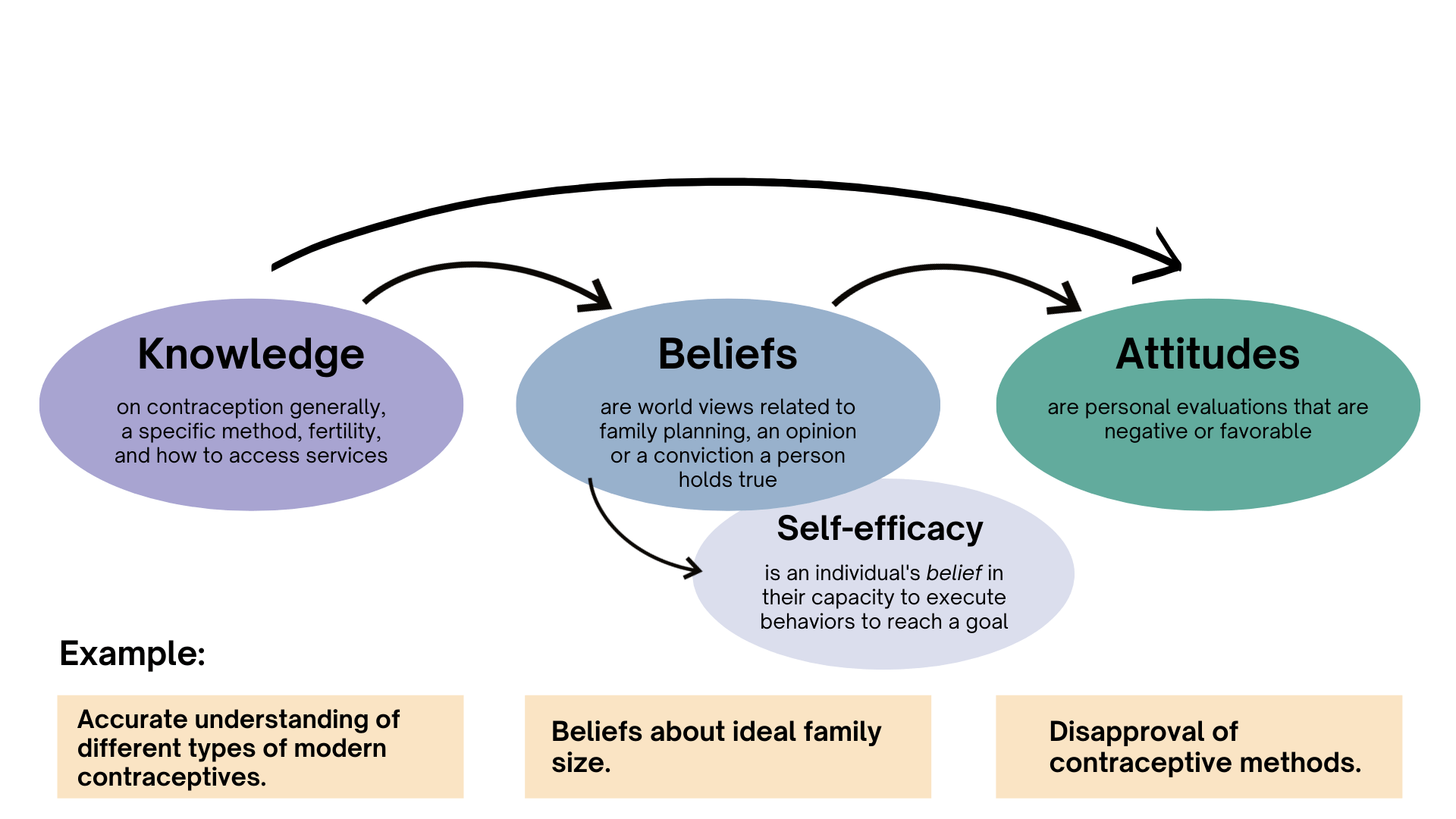 Knowledge, beliefs, attitudes, and self-efficacy are closely related and influence each other (Figure 1). For example, beliefs in myths and misconceptions about contraception are often a function of poor or inaccurate knowledge.7,8 In some settings, the misconception that family planning use may cause a woman to be promiscuous or lead to sterility is commonly held.9–11 Misconceptions of contraceptive-induced menstrual changes are also common, such as that amenorrhea can cause a build-up of “bad blood” that can harm one’s health or fertility.12 Such beliefs can lead to negative attitudes about family planning and contribute to non-use or discontinuation.14 Finally, self-efficacy is a powerful form of belief—belief in one’s own ability—and is recognized as a key influence on behavior.15

Implementing interventions to strengthen an individuals’ ability to achieve their reproductive intentions by addressing their knowledge, beliefs, attitudes, and self-efficacy is one of several proven “high-impact practices in family planning” (HIPs) identified by the HIP partnership and vetted by the HIP Technical Advisory Group. This HIP brief together with the other two HIP briefs focusing on understanding and addressing behavioral determinants (social norms and couples’ communication) recognizes that factors influencing health behaviors exist on multiple levels, are interrelated, and extend beyond the individual. Together with the group of briefs on specific channels to reach your audience (mass media, community group engagement, digital health for social and behavior change), they provide critical information on what works in family planning social and behavior change (SBC) programs. Please see this overview of the SBC HIP briefs. For more information about HIPs in general, see this overview. 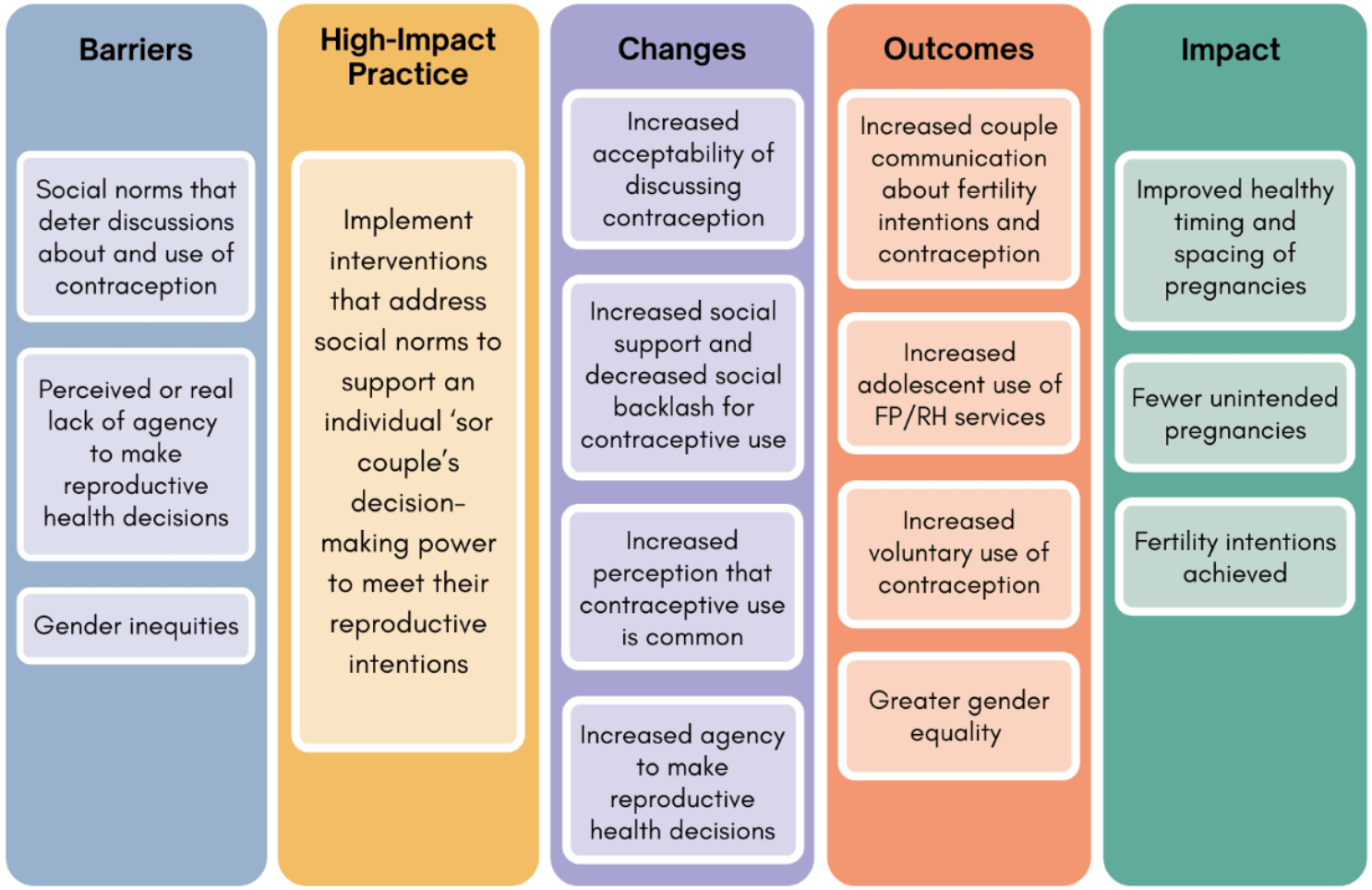 Why is this practice important?

Strengthening family planning knowledge is fundamental to voluntary, informed, and correct contraceptive use. Individuals who have correct information about contraception, including about its side effects, tend to look favorably upon and to be more likely to use family planning.16 Among adolescents from low- and middle-income countries (LMICs), low levels of sexual and reproductive health knowledge are associated with reduced access to contraception, particularly among unmarried adolescents.17 This includes providing information about menstrual health and the menstrual cycle and how it relates to pregnancy and fertility. A study in 29 African countries among adolescent women 15–19 found high incorrect knowledge of ovulation and an association between incorrect knowledge and unintended pregnancy.3 Additionally, some women may use a family planning method but lack the knowledge about how to use it correctly, leading to inconsistent and/or incorrect use which reduces contraceptives’ full ability to prevent pregnancy. For example, some young women may only take oral contraceptives just before or just after intercourse rather than daily as prescribed.18 In addition, some women may not have complete knowledge about the potential side effects of contraceptives or about contraceptive-induced menstrual changes. They may view side effects or menstrual changes as dangerous or unhealthy, which can act as a major barrier to uptake and use.12,19 The importance of accurate family planning knowledge has been heightened with the advent of the Internet and social media, which can be used to rapidly spread misinformation.20

Favourable attitudes about family planning influence voluntary26 and consistent contraceptive uptake. In Baringo North District in Kenya, for example, significant predictors of contraceptive use included method approval by self and partner.27 In contrast, studies in India and Kenya indicate that negative attitudes deter use28,29 or influence to method discontinuation.30 Supportive attitudes by influential individuals (including religious leaders, husbands, and mothers-in-law) also strongly influence contraceptive uptake by women.10,31,32

Among the SBC family planning studies addressing knowledge, beliefs and attitudes, there have been several successful and unsuccessful interventions. This highlights the importance of designing interventions that respond to local needs and address context-specific barriers and facilitators to achieve fertility intentions. Successful interventions typically not only addressed knowledge, beliefs, attitudes, and self-efficacy but also other important social and behavioral factors, such as promoting couples’ communication and addressing social norms. Evidence indicates SBC interventions that address factors at more than one ecological level (also known as multi-level interventions) are most effective in reaching their ultimate behavioral and health goals. See the SBC HIP overview brief for further information. Additionally, experience in family planning and other areas shows that successful multi-level interventions also address barriers to accessing services.37,38

SBC efforts to address knowledge, beliefs, attitudes, and self-efficacy to strengthen an individual’s ability to achieve their reproductive intentions have been documented through: 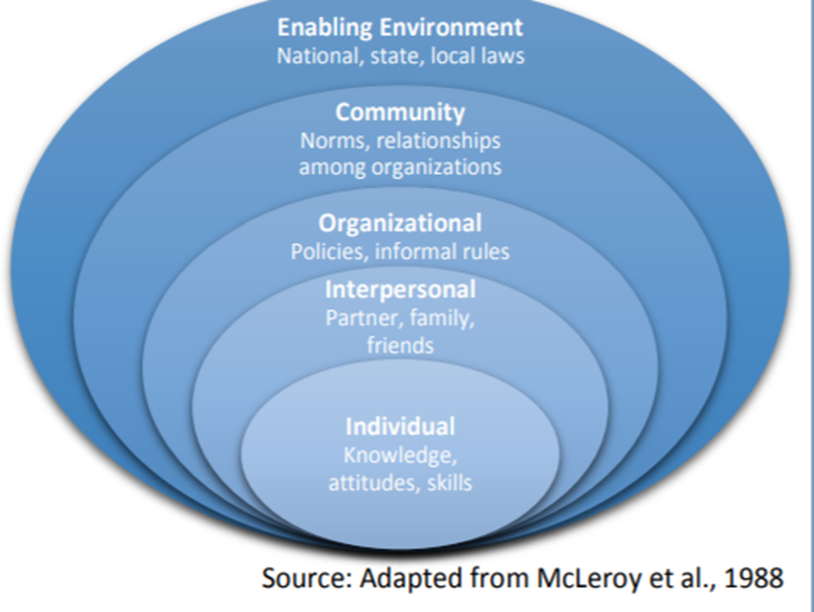 How to do it: Tips for implementing SBC interventions

There are numerous indicators to measure the implementation of this HIP. For more information on indicators refer to the SBC indicator bank.

The World Health Organization/Department of Sexual and Reproductive Health and Research has contributed to the development of the technical content of HIP briefs, which are viewed as summaries of evidence and field experience. It is intended that these briefs be used in conjunction with WHO Family Planning Tools and Guidelines: https://www.who.int/health-topics/contraception

The HIP Partnership is a diverse and results-oriented partnership encompassing a wide range of stakeholders and experts. As such, the information in HIP materials does not necessarily reflect the views of each co-sponsor or partner organization.

To engage with the HIPs please go to: https://www.fphighimpactpractices.org/engage-with-the-hips/