Mass media programming in reproductive health can influence individual behaviors by providing accurate information, building self-efficacy, and promoting attitudes and social norms that support healthy reproductive behaviors. This brief describes the evidence on and experience with mass media programming in family planning. The distinguishing characteristic of mass media programs, relative to other social and behavior change (SBC) interventions, is that they reach a large audience—often national in scope—with consistent, high-quality messages, primarily through TV and radio (e.g., public service announcements or advertisements, talk shows, or serial dramas). Some mass media programs also use ancillary print materials. Approaches that rely on digital technologies, such as mobile devices and social media, are not covered in this brief.

Programs frequently use mass media as part of a package of interventions to influence the individual, family, peer group, and/or community simultaneously. Mass media should be linked with other SBC approaches, such as interpersonal communication or community group engagement, and/or investments in service delivery improvement for greater impact.

Individuals face many barriers to accessing and using contraceptives. Mass media programming can be designed to overcome lack of knowledge about fertility and contraception, correct misperceptions about one’s risk for unintended pregnancy, allay concerns about side effects of contraceptive methods, increase self-efficacy or confidence to take action, and/or change perceived norms that discourage family planning and contraceptive use. The theory of change shown in Figure 1 illustrates the potential pathways through which mass media programming may influence key reproductive behaviors. It is based on a synthesis of theories and frameworks commonly used to design mass media programs.1-3 Although the theory of change is set up in a linear, unidirectional format, it is likely that the mechanisms of action are multidirectional and more complex.

Mass media programming is one of several proven High Impact Practices in Family Planning (HIPs) identified by a technical advisory group of international experts. A proven practice has sufficient evidence to recommend widespread implementation as part of a comprehensive family planning strategy, provided that there is monitoring of coverage, quality, and cost as well as implementation research to strengthen impact.4 For more information about HIPs, see http://www.fphighimpactpractices.org/overview. 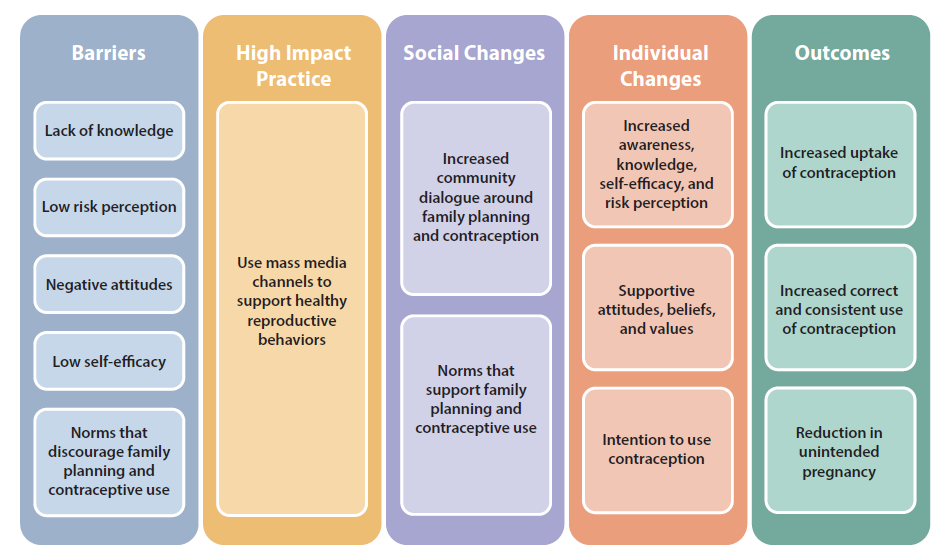 Assumption: A significant proportion of the target population has access to and uses mass media.

Mass media programming contributes to improving sexual and reproductive health knowledge and increasing self-efficacy in support of healthy reproductive behaviors. In many settings, men and women lack a basic understanding about sex, reproduction, and their risk of pregnancy—knowledge that is important for people to believe they need to use contraception.5,6 A systematic review found that in 8 of 9 studies, exposure to mass media content was associated with higher levels of knowledge and/or positive attitudes about contraception.7 But even if people know about available methods, a lack of self-efficacy can limit contraceptive use. Studies in Tanzania and Uganda have shown that exposure to well-designed mass media programming can improve self-efficacy for contraceptive use.8,9

Mass media can shift norms and increase social support for healthy reproductive behaviors. Norms around family size and composition, such as preference for a large family or for at least one son, may contribute to higher ideal family sizes and non-use of contraception.11,12 Gender norms also influence sexual and reproductive health behaviors. For example, some gender norms idealize sexual ignorance for girls and limit girls’ and women’s decision making about their own health.17-19 A number of studies have shown that there is an association between men’s knowledge and support for contraceptive use and women’s use of contraception.20,21 Further, open communication between couples about family planning can contribute to contraceptive use.11,22 Evaluations of mass media programs in Cameroon, Egypt, and Tanzania documented a positive effect of mass media on spousal communication about family planning.8,23,24

What is the evidence that mass media programming is high impact?

Impact evaluations of mass media programs are sometimes challenged on methodological grounds because the audiences of mass media programs are not randomly assigned to receive the program “treatment” (i.e., exposure to the program or to a control condition. By their nature, mass media programs are designed to reach as many people as possible and exposure is largely determined by the reach of radio and TV channels used, as well as by audience members themselves. However, advanced statistical techniques allow evaluators to assess the effects of exposure while controlling for lack of random assignment and personal exposure bias. This section summarizes results from the strongest evaluation designs.16,24,29

Mass media interventions contribute to increased contraceptive use. Table 1 summarizes 12 studies that show a statistically significant effect of exposure to mass media on modern contraceptive use. Four other studies (not summarized in the table), also with strong evaluation designs, found effects that were not statistically significant15,25,26 Outcome effects in Table 1 are presented in 2 ways—percentage point difference between those exposed and unexposed and adjusted odds ratios of contraceptive use based on exposure to the program. Exposure is often determined by self-report on a “yes” or “no” basis.  Few studies assessed frequency or intensity of participant exposure to programming.

The 12 effective programs targeted both men and women of reproductive age. Based on studies that included demographic information on the study population (7 of 12),8,16,23,24,28,29 mass media programs were more likely to reach individuals with higher socioeconomic status (as measured by wealth and education), younger age, lower parity, and urban residence. Six used radio or TV serial dramas, with each drama having 13 to 26 episodes running for 6 months to 2 years and promotional ads on family planning. Six of the evaluations measured exposure specifically to mass media content. The other 5 evaluations measured exposure to mass media combined with other components (e.g., community mobilization) in one measure.1,23-25,30 Although details of other components were not always available, at least 8 of the mass media programs were linked to service delivery improvements,1,23,25,28-31 such as social franchising, and at least 7 of the programs included community group engagement or community outreach.1,9,23-25,30,31

How to do it: Tips from implementation experience

Invest in formative research to support development of focused messaging and to inform channel selection, program format, and broadcast schedules. High-quality formative research—both quantitative and qualitative—is critical to mass media programming, helping implementers avoid costly mistakes during design, production, and implementation. It can also serve to reinforce the legitimacy and importance of mass media programming for donors and host country governments. Implementers may use primary or secondary research to gain an understanding of priority audiences, their information needs, health behaviors, drivers of health behavior (e.g., gender norms, existing levels of self-efficacy for contraceptive use), and media consumption habits. Increasingly, many implementers rely on both “traditional” public health research methods, such as focus group discussions and surveys, and more rapid yet immersive methods drawn from marketing, human-centered design, and communication science. Once formative research has been conducted, implementers must consider how best to present findings to the creative professionals responsible for developing the brand, campaign, show concept, scripts, and other media outputs. Typically a creative brief is developed through interactive workshops, allowing creative professionals to understand the data and translate it into key program elements.

Partner with local creative professionals to create culturally specific programming. Evidence suggests that mass media is most effective when it closely parallels the lived reality of target audiences.32 For this reason, it is essential to work with local writers, designers, actors, and artists to develop and produce mass media programming. Similarly, using local language(s) to ensure deep understanding of content by priority audiences may be more effective than relying upon a market language or other regional lingua franca. Some implementers have chosen to address this need by developing creative concepts, scripts, or script “briefs” at the national level, then engaging state-level, regional, or provincial groups to develop and record them for the local context. Engaging with local creative professionals also supports development of critical SBC technical competencies, enabling continued development of locally -specific programming across health and development areas.

Consider the nature of priority behaviors when selecting a format. Some evidence suggests that one-time or periodic behaviors (e.g., immunization, antenatal care) may be more amenable to change via mass media than habitual behaviors (e.g., exercise, dietary habits, and feeding practices). Similarly, some behaviors may be more complex than others because they are dependent on other behaviors; require the consent or participation of another person; or are strongly influenced by social norms.33 In considering whether to invest in mass media and what format to use, implementers and donors should review the nature of the behaviors to be addressed and what is known about their drivers in the local context. Anecdotal evidence suggests that long-format media such as serial drama may offer particular value in addressing complex or interrelated behaviors that are influenced by social norms (such as contraceptive use), as it allows for nuanced exploration of these issues and believable modeling of a character’s process of behavior change.

Promote audience engagement and interaction. Engaging audiences and provoking discussion are not only expected in today’s communication environment, they are essential to achieving normative change.34 Historically, many implementers have engaged audiences by complementing mass media programming with listeners’ groups or call-in segments. With the rise of mobile phones and social media, there are now new opportunities to solicit feedback from audience members and/or encourage discussion of media content among peers.

Ensure sufficient reach and frequency of exposure among priority audiences. Research clearly demonstrates that repeat exposure to SBC messages is key to program impact—although the level of exposure required may vary based on audience, channel, and behavior of interest.27,34,35 In designing mass media interventions, implementers must consider what communication channels, radio or TV stations or networks, broadcast schedule, and program format will best enable them to reach priority audiences. Attention to dose-response relationships in program monitoring and evaluation also allows for continued improvement to program reach and frequency of exposure.

Use pretesting, monitoring, and other mechanisms to allow for continued validation, revision, and development of mass media content. Mass media outputs should be tested for comprehension, appeal, and effectiveness at several points during their development, including the early concept phase and following production of initial drafts, storyboards, or pilot episodes.33 When developing long-format media, many implementers find it useful to develop and test episodes in “batches” to allow time for continued revision. Monitoring of mass media should include not only measures of reach among priority audiences but also message recall and intended behavior change. Tools such as media omnibus surveys, available in many countries, can enable implementers to gather this information on a routine basis at relatively low cost. Interactive program features such as call-ins, listeners’ groups, and SMS surveys offer additional opportunities to gauge audience response to existing programming and inform the development of new content. Across all pretesting and monitoring activities, implementers should ensure that media content does not unintentionally reinforce social inequities or harmful norms.

When possible, plan for evaluation that measures behavioral outcomes and allows for cost-benefit analysis. While the impact of mass media programming has been clearly demonstrated, rigorous implementation research remains critical to continued understanding and application of effective practices. Evaluations of mass media programming, like other SBC approaches, should measure changes to behavioral outcomes and not only intermediary factors such as knowledge and attitudes. To the extent practical, evaluations should also include measures of costs and benefits to support strategic selection of channels and approaches in future programming.27 Implementers and evaluators may support both replication of specific types of mass media programming and future analysis of the evidence base by ensuring that evaluation reports and other publications include clear and detailed information about the nature of the program evaluated.

Mass Media: The Evidence Base provides mass media campaign examples and makes the case for investment in quality mass media based on outcome modeling. http://www.who.int/woman_child_accountability/ierg/reports/2012_15S_MassMediaEvidenceBase.pdf

The World Health Organization/Department of Reproductive Health and Research has contributed to the development of the technical content of HIP briefs, which are viewed as summaries of evidence and field experience. It is intended that these briefs be used in conjunction with WHO Family Planning Tools and Guidelines: http://www.who.int/topics/family_planning/en/.

For more information about HIPs, please contact the HIP team at USAID.